Once Upon a Time Capsule

Once Upon a Time Capsule

By all accounts, 1928 must have been a pretty good year. The ‘20s would have still
been roarin’. If you would have said we were but a year away from the start of the
greatest economic downturn of the century, you’d have been laughed out of your
speak-easy. The incalculable losses WWI would have seemed a bit less grievous after
ten years of time-heals-all-wounds. And I’m sure there would have been no shortage
of people to tell you that everything of consequence had already been invented.

For the generation of our grandparents, it might have been our parents’ 1958 or our
anything-before-9/11. Pass the rose-tinted glasses when you’re done with them.

With that idyllic preface, the occasion on November 1st of that year of our Lord, would
have been near perfect for a ceremony in dedication of the laying of a cornerstone at
what couldn’t help but be a wonderful new high school. Break out the ice cream, strike
up the band and let the politicians and official takers-of-credit-for-good-things happening line up to shake babies and kiss hands. Glory be … now every Tom, Dick
and Henrietta would get a first-rate education.

For every bit of the preceding year, Mr. Longnecker and Miss Folger would have been
huddled with the architects, finalizing the hundreds of details that needed to be nailed
down before this day. Even seeing the door pulls, railings and gratuitous brick styling
cues during the final walk-through in 2011, leaves little doubt in your mind that
nothing was left to chance. Flat-tip only … no Phillips head yet. No whatever the big
box has in stock; no if it doesn’t fit, force it; no close enough is good enough. There
was a purity of purpose that everything was part of something organic, and as such,
made its important contribution to crafting a whole so much greater than the sum of
its parts. Why I’ll go so far as to bet there were meetings with parents to talk about
the little tweaks that might help it be even better. Just don’t call them focus groups.
And back then, they might have even waited until afterwards to actually make their
decisions. Imagine that.

Item #347 on that list had to do with the time capsule that would be placed behind the
limestone, 1929-engraved slab. It was just the sort of thing good civic-minded folk
did back then. Acknowledge the past and the present, as a message in a bottle for the
future. And I don’t have a bad thing to say about that.

Doubtful they just looked in the yellow pages under “time capsules,” and went with the
low bid. A local artisan put together a copper box, nothing fancy, approximately
8”x10”x16” because that was the size of the cavity already created for the purpose.
And I’ll guess that “measure twice, cut once” applied as well then as now.

Likely one of the more senior teachers would have jotted down a list of obligatory
treasures thought to be appropriate as content. And again, then as now, tradition was
the guide for such things. Propriety said there should be a newspaper, a U.S. flag, and
of course, of course, a bible. In the precious little space left, there would be a program
for the day’s agenda, a roster of all the teachers and the signatures of all 100-plus
students.

I have no doubt there would have been a grounded, somehow almost primal feeling
when touching it … a fundamental sense of connection with a greater good …
something they would have understood, as would have their parents … the sort of
thing inner smiles are made of.

Rumors of any less-than-proper photos, letters lamenting unrequited love or
mysterious pre-Columbian treasure maps remain exactly that. And unless inserted
just as the lid was soldered in place, the bundle of student notes intercepted while
being passed during study hall and the one knit mitten from lost and found both
missed their shot at immortality, as well. I, for one, would have been delighted had the
smallest bit of the first Fairview made the cut … a drawer handle, a piece of tile, a
knowing glance, but perhaps it would have been too painful just then to think the end
could be near for any Fairview.

And while it’s rare fun to imagine having been a fly on the wall, listening to a
somewhat younger Don D. and Theresa G. laying out their visions for the future, our
past, it’s also every bit a joy ride to imagine what the area looked like, those four score
and seven years ago.

Did the electric trollies make the loop yet in front of the school, turning south at the
Philadelphia corner? Route #5? Hard to think the Miami Valley Country Club was there
already. Good Samaritan Hospital, barely more than a twinkle in the eyes of the Sisters
of Charity, would soon appear with its terra cotta roof tiles and brown brick exterior
walls, embracing a curved driveway in front, punctuated with meticulously tended
floral plots. What businesses were on Salem Ave. in those days? Where was the
nearest farm field? The nearest pristine stream?

If you know someone, ask them. But whatever you do, don’t pick up your smart
phone. So not right.

We’ll have to be content with not knowing so many things about that new Fairview that
would become our Fairview. What did the first auditorium look like, before
disappearing in the ‘50s? Where was the cafeteria serving up those five-star plate
lunches? Were there special rooms for chemistry or home ec … potions and the dark
arts? What was it like to see the thick black coal spire coming out of the giant
smokestack? When did Miss Herbst lay claim to Room 101? When did the library go
fom one room to two? Who wielded the paddle then? What changes came with the
Depression?

Was the cornerstone from the first Fairview saved?

Did seeing that school come down hurt in the same way still so heart-felt to us?

What would you have put in a time capsule back in 1965?

What would anyone put in a time capsule for the new library going up where we once
knew a Fairview? I mean beside the crayons and the Bob Evans placemat.

I think we both know no one will bother. It won’t be in the budget.

I wasn’t there on that autumn day in 2011 when demolition got to the corner of the
building where 1929 lived. Would they have even known to hope for any such thing?
Would their first thought have been that it might be yet another nice chunk of copper
for the recycler?

There’s only the slightest chance that the young finders-keepers would have known
why they felt that inner smile.

Just realize that we have to be the time capsules, now. It’s up to us, the older
generation, to remind posterity of the immeasurable good yet to be gleaned from what
began on an autumn day so long ago. 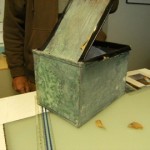 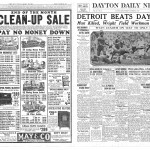 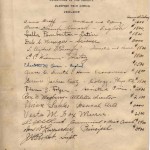