I have heard it said that timing is everything. I’ve always suspected its true, and now I’m a confirmed believer. The airport in Dominica was closed on the previous Sunday, Monday, and Tuesday due to the threat of Hurricane Danny, which never materialized. Fortunately I was able to fly out to attend my 50thHigh School reunion and visit my family in Ohio as planned on Wednesday. 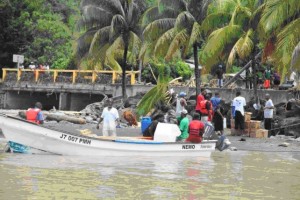 . I realized Tropical Storm Erica was right on my tail, but it was predicted to travel well north of our island. If I was lucky, I might be able to outrun it before it hit San Juan where I was bound to overnight. I slept fitfully, hunkered down under a thin blanket in the freezing cold airport hotel room where an enormous TV screen dominated the tiny space like a temple.

The next morning, I alternately dialed the airline’s toll free number to check on my flight status and roamed the terminal like a zombie shopping for a duty free fix of designer fragrance and other unnecessary but tempting items. My plane to Charlotte was the last scheduled to depart on Thursday afternoon; the evening flights were canceled due to the threating weather. I breathed a sigh of relief when it eventually landed in Cincinnati, but my son had some startling news. It seemed Erica had changed her mind and dumped twelve inches of rain on Dominica! Rivers had run wild, bridges were collapsed, houses were lost to landslides, some people were missing and some were already confirmed dead.

To say I was concerned would be an understatement. I’ve lived on the Nature Island for twenty-two years now, survived three hurricanes and a major house fire, and am well aware of what can happen when the terrain is so rugged and infrastructure is so lacking. Communication by phone was impossible for the first few days, so all I could do was worry about my people, my animals, and my home. What I saw on the Internet didn’t look good. The airport was in shambles, an entire community had vanished, and persons were left buried under the mud where they had perished. At last I made contact with a friend who said the portion of the island where I live was completely isolated by landslide. About a week later, I managed to talk to my son and caretaker who said they were alright but still blocked inside. I considered cutting my visit short, trying to get home as soon as possible. The privilege and excess associated with the States was especially glaring in light of Erica, and I felt guilty and embarrassed to be there.

When it was finally time to return to Dominica, I flew from Cincinnati to Guadeloupe in one day and then took the ferry across the channel the next morning. From the sea, things didn’t look too bad, but close up the island was a disaster. A friend picked me up in town and drove me through a series of terrifying landslides until we reached the one that still blocked the road to my home. The guys were waiting to help me slog across with groceries, dog food, and luggage. As I write, almost a month after the storm, we’re still trapped inside compliments of the passage of Tropical Storm Grace. Thank God I live on a plot of land with its own water, solar electricity, and food: chickens, rabbits, avocadoes, oranges, tangerines, breadfruit, and plenty of coconuts.

Dominicans are a resilient, God-fearing set of people, albeit a bit fatalistic. They know how to pray and make the best of a bad situation, but like most Third World people they honestly believe ‘Jah runs tings.’ Suffice to say they are not the best planners. Why should they be when they’re pretty sure there will always be food falling on their heads and fish leaping in the sea? On a more realistic note, hundreds of millions of dollars (some say a billion) and scores of lives were recently lost to twelve inches of rain. Why? Because the soil was extremely dry halfway into the rainy season. Why? Perhaps due to global warming and climate change. Additionally, a community that had been there for a hundred plus years disappeared under a landslide. Why?  The lack of building codes and clear drains, combined with careless agricultural practices associated with deforestation set the stage for destruction.  The main town, the airport, and several coastal villages were also flooded and strewn with mounds of mud and gigantic boulders; vehicles were lost, buildings were destroyed, and roads and bridges irreparably damaged. Why? They were built with no regard for the power of major rivers hell-bent on reaching the sea.

Time will tell how well the present government addresses the situation. Pledges of aid have been pouring in from sources around the world, yet politics have still played their part in receiving donations. I personally doubt there will be enough money to go around. Funds that were earmarked for future development will obviously have to be rechanneled to reconstruction. But what about planning a sustainable way forward? Help might come from abroad, but in the end how we decide to rebuild our nation for the generations to come will rest solely in the hands and on the backs of we Dominicans.